…Mayor Tandi pleads to residents for a chance to prove themselves

MUTARE Mayor Councilor Blessing Tandi revealed that their greatest obstacle is not the current volatile hyper-inflationary economic environment but the negative legacy perceptions from residents that continue to create a growing rift leading to resistance to comply by the latter.

Clr Tandi said this last week Friday during a SPEAK! event hosted by Kumakomo Community Radio Station in Mutare. SPEAK! is a global campaign launched in 2017 which is coordinated by CIVICUS, as a platform for people across the world to “speak out” on the issues that matter most to them, engaging in powerful conversations that can lead to profound change.

Mutare Mayor Councilor Blessing Tandi (standing) called for a chance to prove themselves as a local authority before being branded by past actions of their predecessors.

Responding to a litany of questions which he was bombarded with by residents over various concerns about poor service delivery, Clr Tandi said in the face of increasing social and political polarization in the country, citizens often want to blame the local authority for every little problem, even when positive, tangible efforts are being made on service delivery. He admitted that they inherited a legacy of corruption and politicking, but people should also not inherit the legacy of politicking and whining, especially civic society groups, instead, they should come with constructive criticism with solutions on the table.

He said it is a chicken and egg situation where all stakeholders should play their part before pointing fingers adding that the inherited legacy issues cannot be completed overnight, so people should exercise patience.

“As a local authority we are greatly suffering from legacy perceptions where we are labelled as thieves. Fair and fine. For instance, some residents at the moment are complaining about our supplementary budget where we want to recover costs to ensure service delivery. So if you (residents) do not comply who will finance the council for service delivery? Council is a lower tier of government with its own autonomy. At the moment we only get fiscal transfer, the five percent devolution fund from government.  It is such criticism that is impeding development. We do not deny politics. Politics is the order of the day. We do not deny people of their rights to civic participation but let’s have meaningful criticism. People do not want to openly look at the root causes of our poor service delivery. Let us not always be in a confrontational attitude but be more of problem solvers,” refuted the Mayor.

Mayor Tandi said a lot has and is still being done to improve service delivery especially on refuse collection which was a thorny issue and ensuring consistent water supply. Responding to a question on the lighting levy and fire levy, where residents from the high density suburbs complained that they are yet to see the use of their money, Clr Tandi said a lot was being done with the funds from the levies, which cannot be channeled for any other use.

He added that all local authority funds are ring fenced, so lighting levy goes towards lighting not procurement of chemicals, the education levy goes towards council school projects and nothing else. Clr Tandi said the only money that can be used as a free fund is from the rates, which mostly cover administration costs and any other council business.

“In Wesley in Christchurch Road we put solar lights and at Christmas Pass we have done a trial run of solar lights. We are trying to reduce costs from energy consumption. The street lighting levy pays for electricity repairs and projects. When we started charging lighting levy we are resuscitating lighting and initiating renewable energy and power saving projects. In 2018 we did about 200 lights repairs. It however does not mean you will see lights automatically working in all your areas. We will move in stages. But what is important is your continued support by paying your levies. We need this money for operational costs to improve our service delivery. We are continually moving ahead with the street lighting project so you will eventually see the results as we go forward,” he said.

The Mayor revealed that his local authority is planning on decentralizing its services, beginning with the fire department which they had budgeted to improve on its efficiency by building a fire station in the high density suburb of Dangamvura, taking into consideration the long distance there from the fire station in town. He however said this all needs money and the hyper inflationary environment in the country has been doing them a disservice on meeting their budget plans. 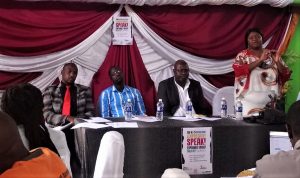 Legal Resources Foundation (LRF) Mutare representative Christine Sungayi said accountability and transparency still lags in public institutions. She encouraged elected officials in political offices to be transparent by giving feedback to the people and ensuring that public consultations on budgets and other issues that concern citizens are well publicized for buy-in.

“Legislators and councilors should be transparent and separate development meetings from party meetings. We also realised that some elected officials are clueless of their roles and need capacity building, of which as Legal Resource Foundation we have been doing these programmes, not only with elected officials but with communities as well, promoting constitutionalism. Development is on several cases failing to take off because of lack of buy-in from communities that fail to see the drawn line between party business and government business. This should be dealt with by elected officials being transparent in all their affairs with the public, separating party business from government business,” she said.