Haulage trucks at Forbes Border Post waiting for their turn to be cleared at the entrance gate to Zimbabwe. The Beira Corridor route is increasingly becoming the alternative to the Durban, Maputo and Dar Es Salaam ports which are far away.

MUTARE City Council is expected to rake in over $3 million (RTGS) annually from its recently proposed road levy on transit haulage trucks, provided the 2019 supplementary budget resolution of $30 (RTGS) for local and $50 (RTGS) for foreign trucks is competently levied, EasternTimesZim has learnt.

During its special Council meeting held on August 28, Council passed a resolution and approved the supplementary budget in terms of section 219 of the Urban Councils Act. Although some proposals which concern high density areas await for approval by the Minister of Local Government, Public Works and National Housing, July Moyo, the supplementary budget proposals for commercial, industrial, institutional and low density areas were approved in accordance with the Urban Council Act. 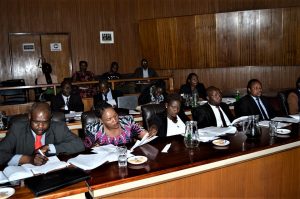 Some of the Councillors (front row) sitting in the Full Council meeting.

The local authority intends to raise its preliminary 2019 budget of $31.1 million to $36.4 million. Among the various tariff measures proposed to try help the ailing local authority recover costs to meet service delivery targets is the road levy for all 30-tonne trucks in transit through the eastern border city. Local truckers will pay $30 and foreign truckers $50.

Mutare Mayor Councilor Blessing Tandi supported the supplementary budget during a recently held SPEAK! event in Mutare, where he addressed civic society representatives and residents. His affirmative position on the matter was regardless of the mixed feelings raised by some residents and civic society groups over the supplementary budget. He said the increments were beyond reasonable considering the unavoidable, volatile hyper-inflationary environment in the country. 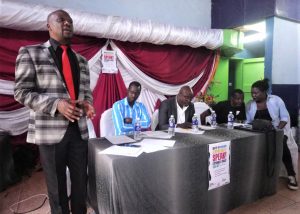 Clr Tandi said the full council resolution on the road levy came as a result of the level of destruction of the city roads due to the increasing traffic of haulage trucks that are now making use of the Beira corridor route through Mutare. In most cases, trucks will be carrying heavy loads, whilst some even carry abnormal loads. The Mutare Mayor said the money collected will go towards their road fund for new projects and routine maintenance.

“We will try and implement the road levy in partnership with Mutare Dry Port (MDP) because the majority of truckers in transit are cleared there when they enter the country through Forbes Border Post, which is nearby. The idea was endorsed in our supplementary budget as a resolution, but the actual operation details are still being worked on. As councilors we develop an idea then the executive will work on how best to implement the idea. We are collecting what belongs to us within our mandate of the Urban Councils Act, so we will not encroach the territories of ZINARA (Zimbabwe National Road Administration),” he said.

The Beira corridor is one of Southern Africa’s main transport routes that links Zambia, Zimbabwe, Malawi, Democratic Republic of Congo (DRC) and Mozambique to the port of Beira on the Indian Ocean by both road and rail networks.

MDP general manager Lawrence Takawira in a separate interview last week Friday said they clear about 300 to 350 haulage trucks a day. The container-handling firm with storage and dry port facilities on rail and road served land, offers import and export agency services on behalf of its clients around the country. Calculating the number of trucks cleared daily this could be translated to amounts not less than $10 000 being collected daily, $300 000 monthly and $3 million annually, if proficiently collected under the road levy. Takawira however said no proposal had come to them yet concerning a partnership on collecting the road levy.

Takawira said the Beira corridor has in the past years received little limelight but is fast becoming considered as an alternative to South Africa’s Durban port and Tanzania’s Dar Es Salaam port for shippers who need a fast, cost effective and no headaches logistics solutions to avoid congestion and escalating costs. Mutare is strategically placed as it is less than 300km away from Beira compared to Durban which is over 1500km away and Dar Es Salaam which is over 2000km away from Harare.

“People’s perception of Beira is still based on operational realities of 15 or more years ago. After dredging the channel and huge infrastructural investments, Beira must be considered as an alternative to Durban and Dar Es Salaam. Principal exports passing through Beira are ores, tobacco, food products, cotton, and hides and skins. The main imports are liquid fuels, fertilizers, wheat, heavy equipment, textiles and beverages,” said Takawira.

Mayor Tandi however added that as a seasoned politician he was now aware of skepticism and how it works in politics, insinuating that some residents always want to go against the tide no matter how much good is done by the local authority, referring to the anti-supplementary budget smear campaigns which have been raised in some corridors.

“We have a challenge with our residents in terms of supporting local authority initiatives. What we did was justice.  The inflation rate in our country is too much these days. We raised our rates to a maximum of 800 percent compared to the 1000 percent increment that is done overnight by those in business. People should support the local authority by paying what is owed and what is demanded from them. This is the only win-win solution to ensure good service delivery. The business sector is constantly changing prices in response to the inflation rate, but when our supplementary budget is proposed to cushion us to respond to the same hyper-inflationary environment, it becomes an issue. That is wrong. We need constructive criticism,” said the MDC Alliance councilor.

Transport and Infrastructure Development Minister Biggie Matiza was early this year grilled over claims that ZINARA was not availing financial resources for road rehabilitation to local authorities in time. Appearing before the Parliamentary Portfolio Committee on Transport and Infrastructure Development, Minister Matiza admitted that ZINARA was not availing funds on time to local authorities for road rehabilitation programmes.

ZINARA which was established in 2002 is mandated to fix, collect, disburse road user charges and mobilise revenue for roads development and maintenance. Its role also encompasses the monitoring of such funds that would have been disbursed for road maintenance to road authorities. However, a recent audit revealed massive corruption at ZINARA where prominent politicians were implicated. For a long time now, most local authorities have been clamouring to retain the responsibility of collecting vehicle licence fees as a replacement of ZINARA. Vehicle licence fees were collected by local authorities (Rural District Councils and Urban Councils) until in 2009 when government decided that ZINARA takes over collection then disburse funds to local authorities.

Mayor Tandi said this year Mutare was supposed to get about US$2.3 million for its road fund from ZINARA, but this has been coming in dribs and drabs, which is not workable for effective service delivery on roads rehabilitation projects. 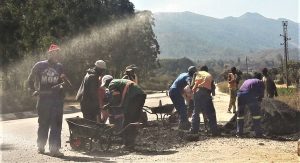 Council workers at work on Magamba Road in June this year. The busy road is in the high density suburb of Chikanga.

“From the ZINARA road fund in May we got $300 000, in June $400 000, then I think we got some more money in August, but the bottom line is this fund is supposed to come once-off, so that we can meet our annual budget plans against a nail biting inflation rate. So the dribs and drabs become unmanageable, but hopefully our road levy from haulage trucks will supplement the ZINARA road fund and ensure consistent revenue to repair our road infrastructure which is in a bad state, especially given our standing as the tourist capital of the eastern highlands tourism bloc,” he said.

Though the idea of the road levy is plausible, the introduction of the levy on truckers who already feel they are over taxed is bound to be a bone of contention. In an interview with some truckers most said they were already heavily taxed and the double road levies were not fair. A few however welcomed the idea on the premise that the local authority will deliver its promise of fixing the inner-city roads which they described as death roads especially for heavy vehicles that would be carrying loads.

During the 52nd Session of the Economic Commission for Africa Conference of African Ministers of Finance, Planning and Economic Development held in March this year, the member States, Zimbabwe included, were asked to look into the structural challenges faced by landlocked developing countries in trade. It was agreed that the structural challenges will be addressed through six mutually reinforcing priority areas namely—fundamental transit policies, infrastructure development and maintenance, international trade and trade facilitation, regional integration and cooperation, structural economic transformation and means of implementation.

“We will support such creative initiatives by our local authority but our buy in is important. We need good roads and they need money to fix the roads. I am sure a win-win levy cane be decided on, but what is important is for our input through our transporters association. If things are forced on people resistance is bound to happen, but in general the idea is good given our economic environment,” said Sigauke.

Hugo Freight director Godfrey Muswere said the additional levy should not infringe fundamental transit policies and international trade and trade facilitation agreements in the region. He said as clearance agents they are enjoying the brisk business and do not want to see people opting the Durban port again because of being over charged in Zimbabwe.

“Its transporters that will be affected mostly but for us clearance agents all we want to see is more business through systems that promote efficiency. More business is promising to come through the Beira corridor, so let us not have too many taxes that will frustrate business,” said Muswere.

For local haulage truckers in transit from outside the country, they pay $20 (RTGS) for road access at the border then $50 (RTGS) at each tollgate. For the foreign truckers in transit, they pay the Zimbabwe Revenue Authority Horse insurance of US$50, trailer insurance of US$10 per trailer and carbon tax of US$10. They also pay for a coupon which is calculated according to their destination within the country. This coupon will give them access to pass through tollgates without restrictions. So the $30 (RTGS) for locals and $50 (RTGS) levies for foreign truckers will add to that.

The scenic, relaxing view by the pool side at Montclair Hotel and Casino in Nyanga.