WE will not see artisanal mining of diamonds anytime soon, but more of joint venture companies that will be working in the Chiadzwa area, the Zimbabwe Consolidated Diamond Company (ZCDC) acting chief executive officer Roberto De Pretto has said.

This was said during a recently held media tour in Chiadzwa for members of the Zimbabwe National Editors Forum (ZINEF).

The call for artisanal mining in the diamond sector has been loud ever since ZCDC took over diamond mining operations in 2016. Government has been mooting this as a move to quiet down the local communities who have in past years expressed discontentment that they have remained poor despite owning one of the most valued mineral deposit in the country. In 2018 some of the villagers even staged a demonstration against ZCDC and accused the company of failing to create jobs and eradicating poverty in the area among other issues.

In response to a question on progress towards the initiating of artisanal diamond mining, De Pretto said joint ventures were best to avoid violating the Kimberley Process Certification Scheme (KPCS), citing that joint ventures were better off as a form of organised artisanal mining that ensures that all proceeds are sold through formal channels to avoid leakages.

“In terms of artisanal mining, the diamond policy does not specify that as it is very different from gold mining. Because of the Kimberly Process (KPCS) it’s very difficult to control the source of those diamonds and we have to be absolutely sure where those diamonds are coming from, that people are not bringing them into this country in Chiadzwa from the DRC or any of the conflict areas. Otherwise, this would be the end of Zimbabwe being able to sell diamonds, because we will be seen as laundering conflict diamonds,” he said.

He added that they are now in the process of finalizing the joint venture agreement that will see the Chiadzwa community have ownership in a diamond concession in Chiadzwa.

“There is a joint venture. Vast Resources is one of the companies that is part of this joint venture and they formed a company called Katanga. Katanga has been turned into a joint venture agreement which we are in the process of finalizing, so that the community will actually have ownership in a diamond concession in the Chiadzwa area,” said De Pretto. 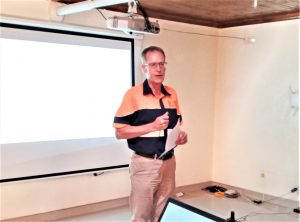 The Romanian company, Vast Resources, has a long-standing presence on the ground in both Romania and in Zimbabwe. However, Easterntimeszim has learnt that whilst ZCDC is claiming that they are still finalizing the joint venture, according to the Vast Resources profile on its website it appears as if it is already operational and the deal in Chiadzwa is complete, which raises eyebrows about the true nature of the venture.

“The Company’s priority is on the advancement of its two primary value drivers, the Baita Plai Polymetallic Mine in Romania, and the Chiadzwa Community Concession in Zimbabwe, into near term production…The Company also has exposure to a pipeline of development and appraisal opportunities in Romania offering additional upside to Vast,” reads part of its profile on the Vast Resources website.

Center for Research and Development (CRD) director James Mupfumi said instead of giving the first rite to local companies or individuals interested in the joint venture with the Chiadzwa community, government as usual first opted international partners, which is questionable.

“In diamond mining for instance government made a commitment to introduce a transparent and accountable policy framework to balance business and human rights. Thus President (Emmerson) Mnangagwa announced that the new diamond policy will make it obligatory for mining entities to remit shares directly to Community Share Ownership Trusts whilst regularising artisanal diamond mining. However, on the ground the implementation of these reforms by his administration has been characterised by policy inconsistencies that have culminated in secretive diamond mining practices that are proving to be more harmful to host communities in Manicaland Province,” said Mupfumi.

Government has often been accused of using bilateral agreements for individual business gains, especially on natural resource deals. The Auditor-General’s reports on Appropriations and Fund Accounts and the reports on State Enterprises and Parastatals presented to Parliament in 2017 and 2018 exposed the secrecy and under-dealings shrouded in Government’s bilateral agreements. According to the Transparency International Zimbabwe (TIZ) this has over the years led to growing public discontent to sluggish implementation of good governance policies and practices in the country, especially in parastatals where corruption is said to be most rampant.

In June 2018, ZCDC availed $5 million for the revitalisation of the Zimunya-Marange Community Share Ownership Trust. However, that same year the state owned diamond company, unlike its predecessors in Chiadzwa, engaged the Marange communities through their community based organisations (CBOs) to come up with sustainable solutions to their age-old conflict by drafting a Memorandum of Understanding, expected to govern how the two parties work together going forward.

The CBOs had for years been very vocal about enhancing sustainable community development programmes as well as ensuring that human rights are observed in mining related operations in Chiadzwa. Chiadzwa Community Development Trust (CCDT), Marange Development Trust (MDT) and Bocha Diamond Community Trust (BDCT) last year signed an agreement to work together with ZCDC in the joint venture deals being considered.

CCDT chairman Newman Chiadzwa was appointed as the CBOs chief negotiator in the ongoing engagements with ZCDC to create a joint venture company that will be see community have a stake.

“I can confirm that we have been engaging with ZCDC but we have not really agreed on the actual terms of the joint venture and how it will work. We have met with the Vast Resources investors but we are still to discuss the flesh of how the joint venture will work and how much community will get of benefit. We have a meeting next week in Harare so maybe I will come back with more information on progress made so far,” said Chiadzwa in a telephone interview on Tuesday.

MDT chairman Malvern Mudiwa said although they have resolved their stalemate with ZCDC they will not let their guard down.

“We will remain vocal to ensure immediate communities benefit from their natural resources particularly when it comes to issues of employment of locals in the diamond mining companies, compensation of relocated villagers as well as environmental concerns. We understand there might be new relocations soon and we will continue to engage ZCDC for fair disturbance allowances and relocation fees for our people. We also want decent housing for villagers relocated,” said Mudiwa in an interview on Tuesday.

In 2016 Government nationalized its diamond mines and revoked the licenses of all the seven diamond mining companies, Marange Resources, Anjin Investments Ltd., Diamond Mining Company, Gyn Nyame Resources, Jinan Mining Ltd, Kusena Diamonds and Mbada Diamonds, that were operating in Chiadzwa, citing failure to remit taxes and royalties, as the main reason among other concerns. This led to the coming into being of ZCDC, which has been operating since then uptodate.

The scenic, relaxing view by the pool side at Montclair Hotel and Casino in Nyanga.