There is an urgent need for respiratory masks in the country especially for the 'low skill' workers such as refuse collectors who are at risk in their day to day job. That picture taken yesterday (Tuesday) in Mutare shows how they are exposed to the unbearable smell of garbage and getting into contact with waste which may be from someone who would have contracted the coronavirus. Protective wear is needed for such workers.

IN a bid to ensure that the country’s economy continues to function under the COVID-19 pandemic lockdown government has left what it is calling ‘essential services’ open. In these service sectors the ‘low income’ workers will be the ones greatly needed to report to work, of which many of them work in jobs that include high contact with other people, which also means that they are the most vulnerable to be hit harder by the virus.

Whilst the rest of the populace is being encouraged to stay or work from home during the 21-days lockdown that started on Monday in Zimbabwe, for the workers in the pronounced essential services they will keep working and risk contracting the virus through exposure with various people in their line of duty.

The key sectors comprise of the majority of public sector employees and critical industry and commerce workers. In the public sector, the lower tier employees such as nurses, social workers, drivers, refuse collectors, local authority officers, police and the military are key whilst in the private sector those working in energy, private security, manufacturing, mining, retail outlets, fast food outlets, pharmacies and banks are all deemed necessary. The list also includes those involved in food production, processing, distribution, sale and delivery, as well as those essential to the provision of other key goods like food and medicine.

The coronavirus will also be an eye opener to government which a few months ago was in conflict with labour unions over the minimum wages of low income workers.  Workers who talked to Easterntimeszim said hopefully, after this epidemic disease is under control, the importance of low income workers will be considered and their wages reviewed.

“Very quickly, this virus is going to circulate a lot faster in the high density suburbs than in the low density suburbs because of our squalid living conditions and poor remuneration. We have an important role to play in building this economy and our role has been shown currently by this virus. We will work for this economy but we are being paid peanuts and our families are at risk,” said one Mutare City Council employee that requested anonymity.

Mutare based general medical practitioner Dr Tapiwa Nyamangodo said coronavirus which spreads like influenza infections will most likely strike low-income neighborhoods more aggressively than affluent ones, especially the poor large families that live in close quarters sharing bathrooms. He said the acquisition of disinfectants as well as provision of personal protective clothing for the employees will help combat the spread of the disease and keep the employees safe as well.

“It is not certain how long the virus that causes COVID-19 survives on surfaces, but it seems it may persist on surfaces for a few hours or up to several days. People could catch COVID-19 by touching contaminated surfaces or objects and then touching their eyes, nose or mouth, so protective clothing is very important. Workers exposed to the public need protective clothing without doubt,” said Dr Nyamangodo.

In a snap survey Easterntimeszim also learnt that most Zimbabweans remain skeptical as whether government will be accountable and effectively implement all its strategies to combat the epidemic, given past experiences where corruption superimposed over developmental and health projects at the expense of public safety.

Easterntimeszim observed that even the officers of the Zimbabwe Republic Police that are enforcing the measures of the stay away have no protective clothing but end of day go back to their families putting them at risk. Dr Nyamangodo urged government to fast intervene and ensure protective clothing is given to the low-income workers on duty during the 21-days shutdown.

Most doctors in public hospitals last week Thursday went on strike over lack of protective gear to protect them in the line of duty against coronavirus infections, joining thousands of nurses who had walked out of their wards in protest countrywide, on the day before (last week Wednesday).

In Mutare Monday and Tuesday recorded almost 100 compliance compliance of staying at home as the CBD was literally empty with just a few people, who were probably part of the essential services, that could be seen here and there. Most banks were however closed and most retail shops and fast food outlets opened till 3pm or 5pm depending with the business activity.

Most pharmacies were opened. The change money hustlers often seen allover town were no where to be found at their usual spots both downtown and uptown. However, it remains to be seen if this will continue as numbers of people in town slightly increased on Tuesday compared to Monday.  Below are some pictures of Mutare since the lockdown on Monday:

A fuel attendant at Total Mutare service station wearing a face mask to protect himself. What is however lacking are the gloves to protect themselves from contact with people, handling money as well as the metallic car surfaces that they open to fuel cars.

People waiting for ZUPCO transport yesterday at the Hobhouse terminal at the Mudzviti bus terminus. A nurse and Zimbabwe Prisons and Correctional Service (ZPCS) worker chat whilst waiting for the bus after work.

Passengers boarding the ZUPCO public transport to Hobhouse yesterday. During the shutdown ZUPCO buses are the only ones that will be operational after government banned all the private commuter transport. New transporters are also being contracted under the ZUPCO franchise to meet the demand. During the lockdown all public transport systems are compelled to ensure hygiene conditions by sanitizing the buses at regular intervals.

One of the pharmacies which was open in Mutare yesterday as part of the key service sectors allowed to remain open. Others such as Clique Pharmacy have improvised and are now offering online services and deliveries to clients within the 10km radius of the central business district who intend to buy medication above US$10.

Most banks in Mutare were closed although financial banking services were allowed to remain open as essential services. People who were expecting money from abroad through Western Union housed in Ecobank Mutare whom Easterntimeszim came across said they are now stranded but are in dire need of  the money during the lockdown. 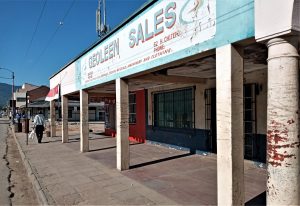 The Moto Moto area downtown in Mutare often infested by money changers and phone dealers was clean and there was no-one to be seen on Monday and Tuesday.