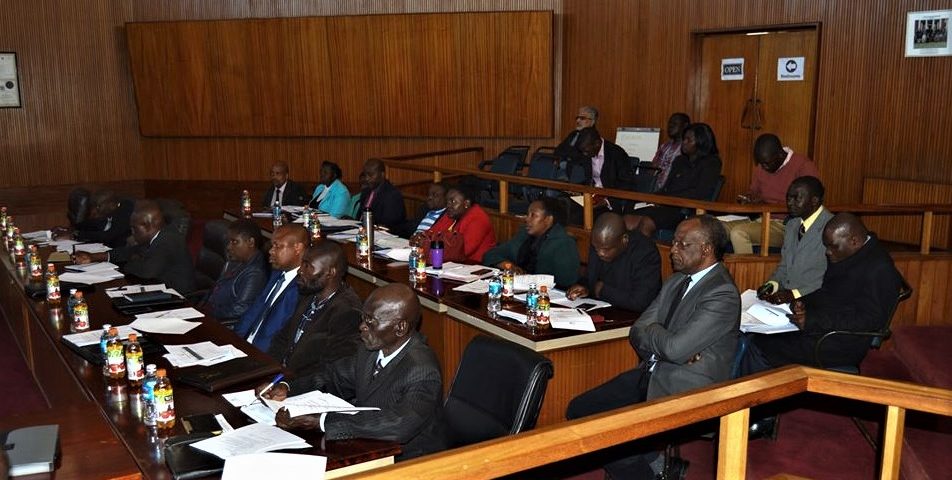 A Full Council meeting last year where the town clerk was introducing the GIZ representative Nerio Nyabvure (extreme right back row with glasses and silver grey jacket) to the councilors, expalaining about their partnership with the German Government funded organisation.

Since 2017, GIZ had partnered with the City of Mutare on many capacity building projects until early this year, when it decided to ‘refocus its project funding’, says Benjamin Klopp from GIZ corporate communications department in Zimbabwe.

Easterntimeszim had inquired from the German Government funded technical advisory organisation, on what led to its abrupt departure after the local authority had last year expressed so much confidence in rolling many beneficial partnerships with them. GIZ was also in the process of renovating an office it would use at the Mutare Town House, a project which was being undertaken by Nerio Nyabvure, their Head of office-Mutare, but all this was abandoned suddenly early this year.

“On behalf of the German Federal Ministry for Economic Cooperation and Development, Deutsche Gesellschaft für Internationale Zusammenarbeit (GIZ) directly worked with Zimbabwean urban local authorities, such as the Mutare City Council in the past. This cooperation with cities (municipalities) mainly focused on improving their capacities to deliver communal services, such as supply of water, and communication between authorities and the citizens, so that the population can better articulate their needs to city representatives,” read the statement emailed by Klopp to this publication.

Klopp said GIZ’s core activities of capacity building would be continued but shifted towards working directly with UCAZ and the Ministry of Local Government, Public Works and National Housing. “Consequently, the cooperation with cities phases out. The office space that one GIZ employee had used at the Mutare City Council can be used by the Council employees again. In addition, our work in Zimbabwe now focusses on strengthening the civil society, human rights and access to justice, as well as on reducing greenhouse gases and violence against women,” he said.

The follow up for clarification from GIZ was after the City of Mutare during a press conference early last month (June), articulated that the unforeseen exit by GIZ was due to bad media publicity the local authority was bombarded with, especially after one article published in February that accused the councilors and senior management of misappropriating over $6 million at a workshop in Nyanga.

Mutare Mayor Blessing Tandi and the town clerk Joshua Maligwa fumed at the Mutare based journalist [Name withheld], that wrote the article which was published in the NewsDay, blaming him for the withdrawal of GIZ sponsorship towards a media call centre project, which was supposed to help advance their mission of turning Mutare into a smart city.

“This city is not for us, so what we encourage you as media is to protect and guard this city jealously. We used $330 000 for a trip encompassing accommodation, food and payments of facilitators. GIZ then withdrew a donation of US$600 000 for a call centre due to a negative news article that claimed we used $6 million (RTGS) on a workshop. Bulawayo has a media call centre project which was donated by World Vision. This call centre project was not meant for me but for the residents of Mutare and we have lost out on it because of that bad reporting. Our appeal is for you media to approach us and ask what you want to hear before writing, not to insinuate figures. Maligwa will remain Maligwa and Mayor Tandi will remain Mayor Tandi, so why are you reporting negative things about us,” fumed Mayor Tandi during the press conference which invited journalists from both public and private media houses as well as freelance journalists.

Maligwa also buttressed on the matter by saying, “Negative reporting has negative effects towards the development of the City. The article that reported that used $6 million in Nyanga for a workshop. This led to the withdrawal of GIZ. The voucher was actually $233 000 covering everything…Our appeal to you ladies and gentlemen of the media about negative publicity about the City is that it deters development. We also want to warn that we will not hesitate to go to courts next time. The evidence is there. Why are you writing negative things when we should be working together,” he said, as he corrected the $330 000 figure said by the Mayor.

GIZ however denied intentions of sponsoring a media call centre project for the Mutare municipality. “GIZ supports partners through technical advice. A sponsorship for a future call centre in Mutare was never agreed on,” said Klopp.

Since 2017, Maligwa said GIZ funded a human consultant project which dealt with job grading, job realignment and job evaluation, which was to the tune of US$136 000, carried out by Price Waterhouse and Cooper (PWC). After completing that project it funded a geographical information system (GIS) project for the high density suburb of Hobhouse, which became a pilot project. He said GIZ also hired engineers from Germany to look into non-revenue water leakage in Mutare which was approximately 60 percent but went down to 57 percent after the survey.

“GIZ follow where there is progress. They came in 2017 and chose Mutare among all the 32 local authorities in the country. They funded many trainings as well. At local level Mutare city was the only city being funded by GIZ. But at national level they were funding Urban Councils Association of Zimbabwe (UCAZ), which is why it bankrolled for councilors workshops. But now GIZ is now only financing at national level,” said Maligwa during the press conference.

The capacity building projects by GIZ unearthed a lot of anomalies in the revenue collection system at the local authority. The billing system was exposed to be in shambles and an audit led to the suspension seven employees in the finance department on allegations of fraudulently siphoning thousands of dollars through dubious transactions in the banking hall. Maligwa last year also admitted revenue collection was in a mess as close to half of all the properties in the city were non-existent on the local authority’s billing system.