A loaded 30-tonne truck going up the steep slopes of the Christmas Pass route from Harare. The steep slopes have become a death trap for haulage trucks with accidents often occurring every now and then.

FORMER Mutare Mayor Brian James has called on the local authority to exert pressure on central government to prioritize the Feruka Bypass Road project as a safer and convenient alternative for haulage trucks than the existing steep sloped Christmas Pass highway route.

The clarion call comes in the wake of the recent accident that happened on July 7, where two people died on the spot while several others got injured after a haulage truck veered off the road from the upper lane down into the lower lane, while descending the steep Christmas Pass curves in Mutare.

James said the number of haulage trucks passing through Mutare because of the Beira corridor were not going to decrease but double in the next few years, so the Feruka Bypass road is absolutely imperative. He said it is only when fatal accidents occur on the Christmas Pass highway that people think of the Feruka Bypass road alternative, but shortly afterwards the realisation of the project goes back to being a pipe dream. 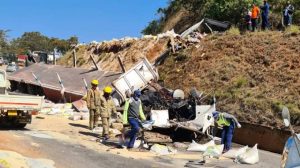 The wreck after the accident that recently happened on the Christmas Pass highway.

The Christmas Pass steep slopes are increasingly becoming a deathtrap for haulage trucks, especially the 30-tonne trucks that will be carrying heavy loads. For many years now, on a number of instances, haulage trucks have been involved in road accidents, mostly due to brake failure when they descended the steep slopes of the meandering Christmas Pass road. Year in-Year out almost every month there is a haulage truck accident on Christmas Pass, be it casual or fatal, the trend is now worrisome.  In a comprehensive interview with Easterntimeszim, the former Mayor, James who served from 2008 to 2012, before being ‘controversially’ suspended, a year before his term ended, said the Mutare municipality must be more hands-on to push for prioritisation and expedience of the Feruka Bypass project. He said this is the only way to assertively evade the increasing number of road accidents and deaths related to haulage truck accidents on the Christmas Pass highway.

“Our Council must be more proactive. Most people in central government do not live here, and it is evident that they are more concerned about where they live because they have stalled this project for too long. The local authority should flight an advert online and in newspapers for investors interested in the project, which will push the line Ministry (Transport and Infrastructural Development) and central government to prioritise the project (Feruka Bypass road), which has been shunned for many years, purportedly due to fiscal constraints,” he said.

Quizzed on progress regarding the Feruka Bypass Road during a press conference in June, City of Mutare town clerk Joshua Maligwa said they had found a potential financier, the Infrastructure Development Bank of Zimbabwe (IDBZ), which has placed the project under its 10 key projects. 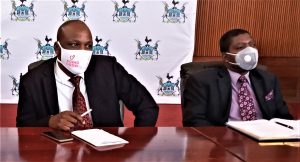 “It is a 10 key project which will be funded in conjunction with the Ministry of Transport and Infrastructural Development and the Government of Zimbabwe. At the moment we have found an interested financier, IDBZ,” said the town clerk in June.

Transit haulage trucks will continue to be on the increase in Mutare because of the Beira Corridor. This mainly because, Forbes Border post in Mutare is the quickest gateway to the sea, given that the port of Beira in Mozambique is just 300km away from the eastern border city. The Beira Corridor is one of Southern Africa’s main transport routes that links Zambia, Zimbabwe, Malawi, DRC and Mozambique to the port of Beira on the Indian Ocean,  linking both road and rail networks. Transit trucks have therefore been on the increase using the corridor, which has not only congested traffic on the Christmas Pass highway, but is also endangering lives as some haulage trucks carrying heavy loads struggle to drive on the steep slopes of Christmas Pass.

However, the Feruka Bypass road was surveyed long ago as another route and an alternative to decongest traffic that uses the Christmas Pass highway, with haulage trucks mostly in mind. The route goes round through the Dangamvura-Feruka Road which passes through the farming plots of Weirmouth and the National Oil Infrastructure Company Feruka (NOIC) depot, then connects with the ARDA Transau and Grand Reef main road that links with the Mutare-Harare highway a few kilometres just after the Mutare tollgate. The Feruka Bypass road was surveyed to be navigable for heavy load haulage trucks compared to the Christmas Pass steep slopes.

However, James said even during his tenure which was about 11 years ago, the same lethargic approach was taken by the City of Mutare administration and the Ministry of Transport and Infrastructural Development towards the strategic road project which was earmarked way before independence, according to him.

“During my tenure money was put up for the Plumtree-Mutare road project and I actually thought it was the opportune time to pursue prospects for the Feruka Bypass road, but there just seemed not to be that will from the powers that be. I am sure there are businessepeople that can be engaged for a BOT (Build, Operate and Transfer) but someone has to put pressure and the City of Mutare is the best to do so,” he said.

Adding, “Its (Feruka Bypass road) on the city’s Master Plan now but the road was first surveyed way before independence. The Beira Corridor, was also envisaged way before independence, so the Feruka Bypass road was surveyed as a second alternative knowing very well that the Christmas Pass highway would be over congested and dangerous for heavy load vehicles in the future as technology would advance in the transport sector to build bigger trucks than in the 1980s…But during my tenure as Mayor we engaged the services of an engineering firm from South Africa, KV3 Engineers, which carried out an unofficial survey just to help us. Their basic recommendation then was that the Feruka Bypass project would not be difficult to undertake, but it basically needed political will,” said James.

Prominent Mutare real estate businessman Joseph Sanhanga in 2018 tabled the Grand Reef aerodrome and the Feruka Bypass projects as key enablers to improve connectivity and business prospects in the eastern border city. Sanhanga however said up-to-date Government lethargy and bureaucracy has been the biggest drawback which pushes away investors that try to push for the projects. He said despite engaging Government on the projects since 2018, too much effort was placed on ‘unnecessary protocol and procedures’ rather than wooing investors to get the project done under a BOT model.

“Government has to leave business to the private sector and do their job of being facilitators for business and regulators. If this is done under the new mantra that Zimbabwe is open for business, the vision 2030 by Government will be achieved. There is too much bureaucracy and this demotivates people in business like us, because time is of essence in business,” said Sanhanga in an interview last year after frantic efforts to get the Grand Reef aerodrome refurbishment project on track, a project that would enable direct air connectivity of small airplanes to Mutare.