One of the sponsors of the ShaSha homecoming in Mutare, 515 Luxury Tours director Takudzwa Saruchera (left) with ShaSha during the press conference at Holiday Inn Mutare yesterday (Wednesday).

FROM primary ambitions of being a nurse, the story of Zimbabwean born South Africa based rising songstress ShaSha, is an awe inspiring story of how fate works in mysterious ways in life.

Addressing journalists in Mutare during a homecoming press conference yesterday (Wednesday), ShaSha whose real name is Charmaine Mapimbiro, said she has been in Zimbabwe for a week now but arrived in Mutare yesterday. She spoke her heart out about her upbringing and road to fame in the cut throat music industry in South Africa. She said growing up she moved around a lot, but most of her teenage and adulthood years, which are the formative years, she stayed with her grandmother in the high density suburb of Dangamvura in Mutare.

The 26 year old Amapiano queen as she is fondly known, went to high school in Manicaland schools such as St Davids Bonda in Mutasa, St Patricks High School in Nyanyadzi and Alpha Institute in Mutare. To show her love for the eastern border city she actually penned a song last year titled ‘Mutare’ in which she praises the beauty of the city and its people.

“In Dangamvura, I stayed in Area 13 with my grandmother…I moved a lot growing up, juggling between Mutare, Bulawayo, Harare and South Africa. You can imagine I went to 10 different schools. But most of my teenage to adulthood years were in Mutare, so I can say Mutare really moulded me to be who I am,” she said, speaking a bit of the Manyika dialect to prove that she indeed grew up in the eastern border city of Mutare.

She admitted that she never expected to one day become a music star carving her own history to become the first Zimbabwean to be nominated and win an international BET Award. ShaSha scooped the Viewer’s Choice Best International Act award at the Black Entertainment Television (BET) Awards held in June, surpassing phenomenal nominees, Nigeria’s Rema, Celeste and Young T & Bugsey of the United Kingdom as well as France’s duo of Hatik and Stacy. The BET Awards which are held annually is an American awards show established by Black Entertainment Television network to celebrate African Americans and other American minorities that would have excelled in music, acting, sports, and other fields of entertainment.

ShaSha encouraged backyard studio artistes to dream big. She revealed that her first recording was in a backyard studio in Dangamvura and it was because of her friend that she got her first big music break, encouraging dreamers that opportunities come in mysterious ways and at times unexpected. “I was actually supposed to do nursing that time after high school but I guess fate had something else for me because while I was waiting to be accepted into nursing, I would go for music recording sessions at backyard studios for the fun of it. So one of my friends took my demo to a radio station in Harare and I ended up being invited there to meet Audius Mtawarira and from there I started working with Audius and his team,” she said. 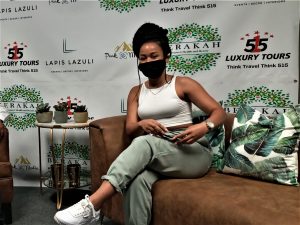 ShaSha at the Mutare press conference

In 2014, after rising to stardom in 2002, the multi-award winning Zimbabwean international artiste Audius Mtawarira of the ‘Muchandiona’ and ‘If only you knew’ fame, through his recording label, Blind Faith, started signing local artistes. In 2014 ShaSha was among the promising musicians signed to the Harare based label and groomed by Audius as he is affectionately known.

ShaSha said during her three years under the Blind Faith recording label she shifted base to Harare where she tried to breakthrough and make a name for herself. The exposure under the Blind Faith record label helped profile her and paid off as she headlined as a solo act two years later at the 2016 Harare International Festival of the Arts (HIFA), an annual festival which is known to showcase the very best of Zimbabwe in the arts industry.

In 2017 after being connected to the Grammy award winning Zimbabwean songwriter and record producer, Brian Soko who is based in the United States of America (USA), ShaSha was linked with some producers in South Africa and began her journey to try and breakthrough in South Africa, based in Johannesburg. As fate had it again, in SA it was a mere regular taxi driver, who also hailed from Zimbabwe, that connected her with DJ Maphorisa, whom she now works closely with doing the Amapiano medleys.

“The cab driver that used to carry me around to and from my recording sessions one day just asked me what I did for a living. I told him that I was a musician and would be going for recording sessions to studios each time he picked me up. He then said he knew DJ Maphorisa and could link me up for an audition. Yes, it was my cab driver that linked me up with DJ Maphorisa. The hook up happened and I played my ballads for DJ Maphorisa, he liked them and that was that, until present-day,” she said.

Amapiano is a style of house music that emerged in South Africa in 2012. It is a sophisticated hybrid of deep house mixed with a jazzy soulful sound of the piano and lounge music characterized by wide basslines. With DJ Maphorisa and Samthing Soweto they have since then produced many hit songs such as ‘Tender love’, ‘Something for you’, ‘Abondaba’, ‘Emazulwini’, among other songs.

ShaSha said growing up from humble beginnings, she was groomed to be respectful of everyone and up-to=date even as a celebrity, she remains humble knowing very well that it was ordinary people that believed in her and supported her up to get where she is. She also said she is a very spiritual person that believes in Gods will in everything that she does. “I was taught to treat people right and I take ubuntu very serious and it’s a part of me ubuntu, even present day,” she said.

Asked about her future in the industry given her recent collaboration with Zimbabwean Hip-hop artiste Hillzy, real name Hillary Chipunza, ShaSha said she is flexible to change genres, and not to just do Amapiano, because end of day she is a musician. She however dreams of making it big in the industry like one of her biggest icons, the late Dr Oliver Mtukudzi.

“I am a diverse artiste. At the end of the day its music and I play around with different genres. Amapiano is something that I liked, Hip-hop is something that I listen to and like and RnB as well, so if I like it, I will be like why not. I do not want to box myself in one little world, but at the end of day I call myself a musician…Growing up we listened a lot to Oliver Mtukudzi. He was a Zimbabwean act that started from home and he flourished and became a huge international act, so that is a huge inspiration for me and I aim to follow such footsteps,” she said.

ShaSha also drove around Mutare yesterday, courtesy of the local tour sponsors, 515 Luxury Tours which is owned by young entrepreneur Takudzwa Saruchera, Berakah, a health and beauty spar, Lapis Lazuli an events and interior décor consulting agency as well as Peak and Media which was doing the video and photography promotion for her Mutare visit. She also did promotional activities for some retail outlets like Spar Mutare where she was showered with hampers and interacted with shoppers. 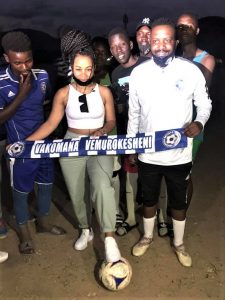 ShaSha in the ghetto in Dangamvura.

The Amapiano queen also passed through Dangamvura where she retraced her roots as a ghetto girl and met with some family, friends and old associates. Tonight, there will be a red carpet event at Holiday Inn Mutare which will also be a meet and greet event to officially celebrate ShaSha’s BET Award achievement. The event will be officiated by the Minister of State for Manicaland Provincial Affairs and Devolution Dr Ellen Gwaradzimba. It is expected to start at 6pm.

Tomorrow night (Friday) there will a homecoming party for her at the upmarket nightclub BarCode Mutare, where she is expected to do a cameo performance and mix and mingle with her local fans as well as to get a feel of the eastern hospitality and night life. After that she will go to Bulawayo as her final touring destination before she goes back to SA. She is also doing visits of tourism areas to promote the brand Zimbabwe tourism campaign. 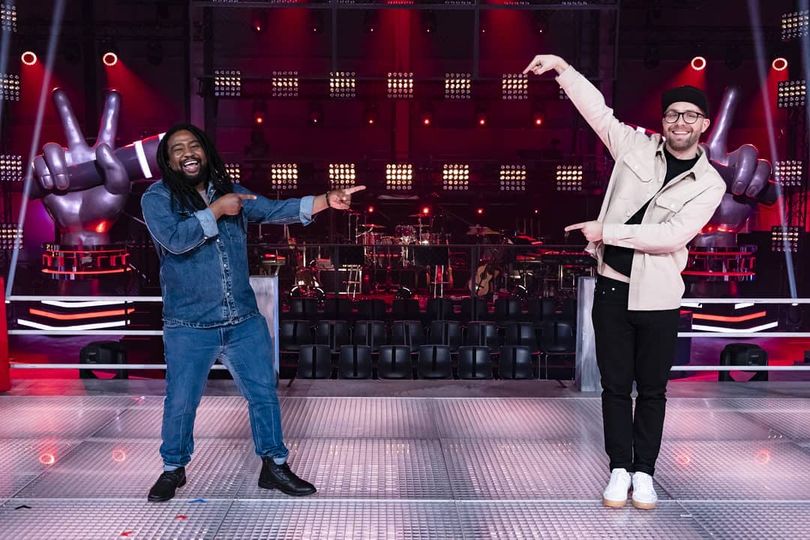 I-Finton (left) with his The Voice of Germany coach Mark Forster during the battles.(Picture by ProSiebenSAT. 1/Richard Hübner)