THE new Zimbabwe Prisons and Correctional Services (ZPCS) Commissioner-General Moses Chihobvu is aiming to expand and open up to more public and private partnerships to improve on the standards of the country’s prisons, Easterntimeszim has learnt.

This was revealed on his tour of Mutare prisons last Friday which was his last stop after touring all the prisons in Manicaland. ZPCS Officer Commanding Manicaland Province Assistant Commissioner Spetosomusa Chinobva among other ZPCS provincial heads accompanied the Comm-Gen during the tour. Comm-Gen Chihobvu said as the new prisons boss, he will encourage his officers to be more business minded as this is the only way to remain afloat especially during the global covid-19 era, which is crippling all sectors.

“We are touring all provinces in the country with the aim of assessing our farms and see what our officers produced. In Manicaland we toured their farm and we are expecting a bumper harvest. From the day of take over from the late retired Comm-Gen Major – General Paradzai Zimondi he laid a foundation for us to take over from where he left. I expect our officers to work as a team, shun corruption and also be business minded because people blame us for not being business minded. We need to work very hard to provide sufficient food for the inmates,” said the Comm-Gen Chihobvu.

The new ZPCS boss was promoted last year on November 1 from Deputy Commissioner-General. Comm-Gen Chihobvu who hails from Manicaland was the Senior Assistant Commissioner Rehabilitation and Officer Commanding Manicaland Region before his prior appointment as the Deputy Commissioner-General, with responsibility of correctional services. However, his background history spans back to 1999 when he was seconded to ZPCS from the Zimbabwe National Army and appointed personal staff officer to the Commissioner of Prisons. He rose through the senior ranks of the service and in his rise has served as Chief Staff Officer Security and Protocol, Assistant Commissioner Security and Protocol up-to-date at the helm. 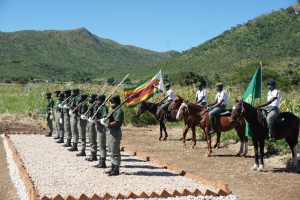 Comm-Gen Chihobvu who is a holder of a Master of Science in Strategic Management and a BSC (Hon) degree in Management and Entrepreneurial Studies among several other qualifications said he is thankful covid-19 has not gravely affected them. He however said remand prisons which have a lot of in and out movement of inmates not yet convicted are the biggest threat.

“During covid-19, we are also struggling like any other organisation, but blessed that it’s a few who have contracted it from the officers to the inmates. Only about four officers and four inmates as well are on record to have contracted the virus. The main challenge is the newly admitted inmates. Those convicted in prison are already safe because we give them masks and they are sanitizing, though social distancing is very difficult because of overcrowding,” said the Comm-General.

He said continuous de-congestion of prisons is now very necessary, which is why the anticipated second Presidential amnesty is necessary. He however said figures of how many will be pardoned have not yet been confirmed as they are also still waiting for the papers and verification of who qualifies.

He applauded the ZPCS rebranding in 2014, which has seen great improvements in rehabilitation programmes and treatment of inmates to meet the United Nations minimum rules on the treatment of offenders, better known as the Mandela Rules. Named in honour of the former South African President Nelson Mandela who spent 27-years in prison for his political activism against the apartheid system, the rules are strict on keeping inmates safe from assaults as well as to ensure their entitlements to medical care, prohibit cruel and unusual punishment of inmates as well as sexual victimization or forced sodomy among many other concerns.

“Since rebranding to ZPCS we have gone a little bit further to make sure inmates and officers comply to the Mandela Rules. The way inmates relate to officers have really improved, but we do have challenges where our budget does not permit us to do everything. For instance If we look at the space in all our prisons, they were built in 1910 and need upgrade but we do not have the money. It’s a huge challenge but we are doing our level best,” he said.

On progress regarding the first female open prison project expected to be built in Marondera, Comm-Gen Chihobvu said preparations have reached an advanced stage to get the project started. Inmates at an open prison are allowed to go home and spend time with their family members and relatives. He however said for the time being they want to make sure they have female quotas in all their prisons nationwide.

The Com-Gen also dismissed the public outcry on social media about preferential treatment of inmates following the release of suspected land baron Felix Munyaradzi who was allowed to attend a funeral during his imprisonment last year. “According to the Prions Act Section 121, it allows the Minister to grant permission for someone to leave prison temporarily.  I do not know the motive of people that started the rumours. I am surprised. Munyaradzi went to attend the funeral but he was back by 4pm the same day. It is allowed according to the law,” he said. 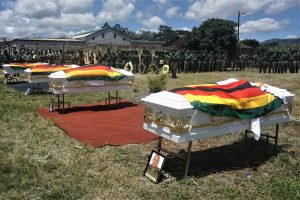 The funeral parade for the four ZPCS officers.

The visit by the Comm-Gen Chihobvu comes a few weeks after seven people died in Manicaland on 5 March when the ZPCS pick-up truck collided head-on with a fuel tanker at the 67km peg along the Mutare-Nyanga Road. Four of the victims were ZPCS officers while two were civilians and the other victim an inmate.

The four ZPCS officers, Mango Chakanyuka (42), Maluvani John (38), Rima Moses (40) and Faith Nyapokoto (33) were given a befitting funeral parade send-off in their honour. The two civilians were Alice Joma (42) and Ruvarashe Karairwa (20), and inmate Anesu Muusha (48). Two other inmates that were in the truck survived the fatal accident but have been reportedly recovering well. 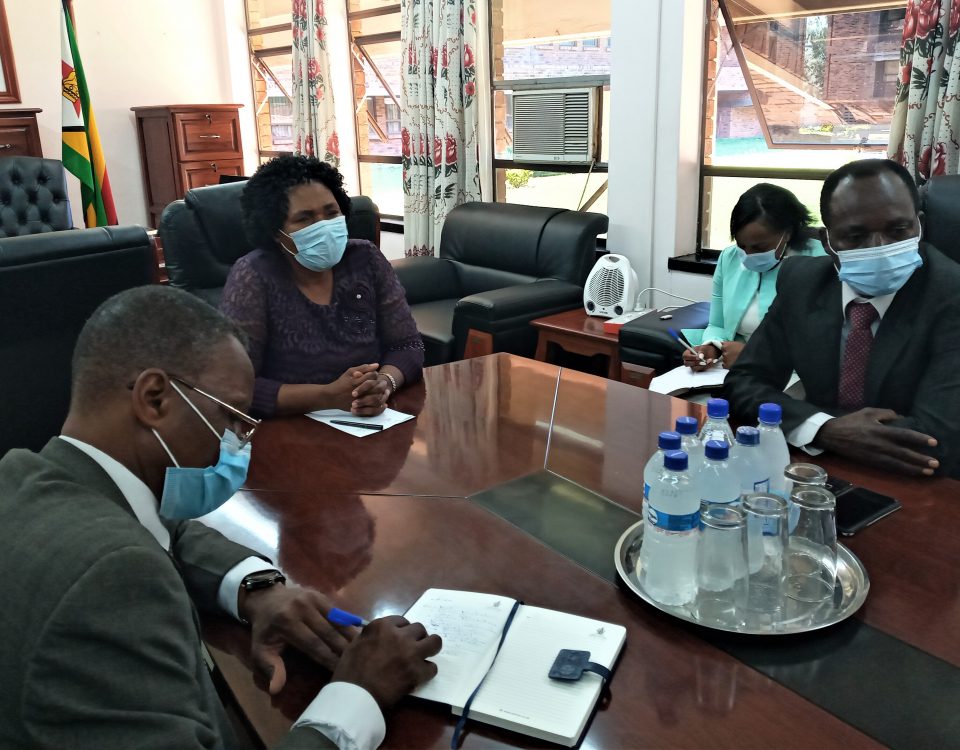