…Super Six rugby to make a return before July

ZIMBABWE needs to return in the Rugby Africa top four for the International Rugby Board (IRB) to increase its grant towards rugby development in the country, the Zimbabwe Rugby Union (ZRU) president has said.

Speaking during a recently held two days stakeholder meeting in Mutare, ZRU president Aaron Jani explained that from a grant of over 100 000 pounds that used to come from IRB early 2000, Zimbabwe now receives half of that, which makes it literally impossible to effectively and professionally run rugby programmes countrywide.

“The reduction of our grant from 100 000 pounds to 50 000 pounds really affected us. Imagine, Namibia currently ranked second in Africa received 1.2 million pounds from IRB. So, low funding affects the development of the sport. Our visit here is to make you appreciate the dynamics so that we work together,” said the president.

Jani, a former Old Miltonians player, who earned 32 caps with Sables also spoke about the need for adequate preparation for the World Cup qualifiers expected to take place in 2022.

“This means ensuring we participate in all international competitions for the Sables including the Gold Cup, Victoria Cup and SuperSport Challenge… Once we get our grant to 1.2 million pounds it means even Manicaland can get money. The pathway for us to get back or surpass is to get our women’s’ and men’s rugby for 15s and 7s as well as our Under 21 rugby back in the Africa Rugby top four, of which we are currently on fifth place. But to achieve this we need your input through a broad player base to feed the national team,” he said.

The ZRU president promised the return of the Super Six rugby tournament this year introducing a women’s format of the tournament as well. Ambulances and referee fees will be catered for by ZRU unlike before when the hosting clubs footed the expenses. He said a committee will be set up to finalise on the format of the tournament, but ZRU has secured funds to ensure the tournament returns this year. After making a return in 2016 under ZRU, the Super Six tournament which comprises of Harare Sports Club, Old Georgians, Old Hararians, Old Miltonians, Matabeleland Warriors and Mutare Sports Club, has sadly been struggling due to limited sponsorship. In 2019 the last round was not played because of financial challenges by teams that failed to meet away travel fixtures.

The country’s topflight club rugby league is in dire need funding. When Delta Beverage’s Lion Lager brand was the official National rugby League (NRL) sponsor after signing a three-year sponsorship deal in 2011 which ran upto 2013, exciting, competitive rugby was experienced. The contract catered for all the travel expenditures of eight teams in the topflight league and also provided new jerseys and training gear.

“It’s (Super Six) going to be the same structure with representation from the different provinces, but a select committee of coaches is going to decide the format of the tournament. The budget will certainly cover the first round matches but perhaps second round matches we will certainly need a sponsor,” said Jani.

He said the first national games, which will be the Rugby Africa Cup games are expected to start on July 8, so there is need for the domestic 15s season to kick off way before that for selectors to get the opportunity to scout local players. There will also be two games prior the Africa Cup, against Namibia and Zambia. “So, ideally we hope the committee will get the league started as soon as possible with those dates and plans in mind.”

Jani added that everything is now set to get back to rugby. “The Covid-19 pandemic has disrupted many sporting activities across the globe. As a contact sport we were told that we just have to ensure the Covid-19 protocols of testing all players and sanitizing before we begin. MSC rugby field has been approved as the one ground in Manicaland to get club rugby back on track. So when you are ready to start training you must first write to us then we will forward your letter to the Ministry of Youth, Sport, Arts and Recreation and the Sports and Recreation Commission (SRC) for the green light. There is also the issue of testing. We will present our partner to get all players tested before the season commences.”

Jani said the Under-21 league will also return but will be played in provincial tournaments. He said they are however still looking for funds for a capping tournament to have all the top teams countrywide play in a final.

“We appreciate your contribution to the national team. You participate in the women’s, 7s and 15s rugby, but we know the numbers can increase and that is what we are looking forward to see you achieve,” said Jani.

Jani who came with his deputy Losson Mtongwiza handed over a donation of a hand sanitizer gadget, sanitisers and masks bought through the Rugby Afrique grant to help during Covid-19, in preparation for the return of rugby.

Amongst some of the issues raised by Manicaland stakeholders was need to spread and promote the sport by having more national tournaments played beyond Harare and Bulawayo. There was also a suggestion for decentralization of funds to manage rugby development equally countrywide given that the anticipated devolution matrix will allow such systems of governance. 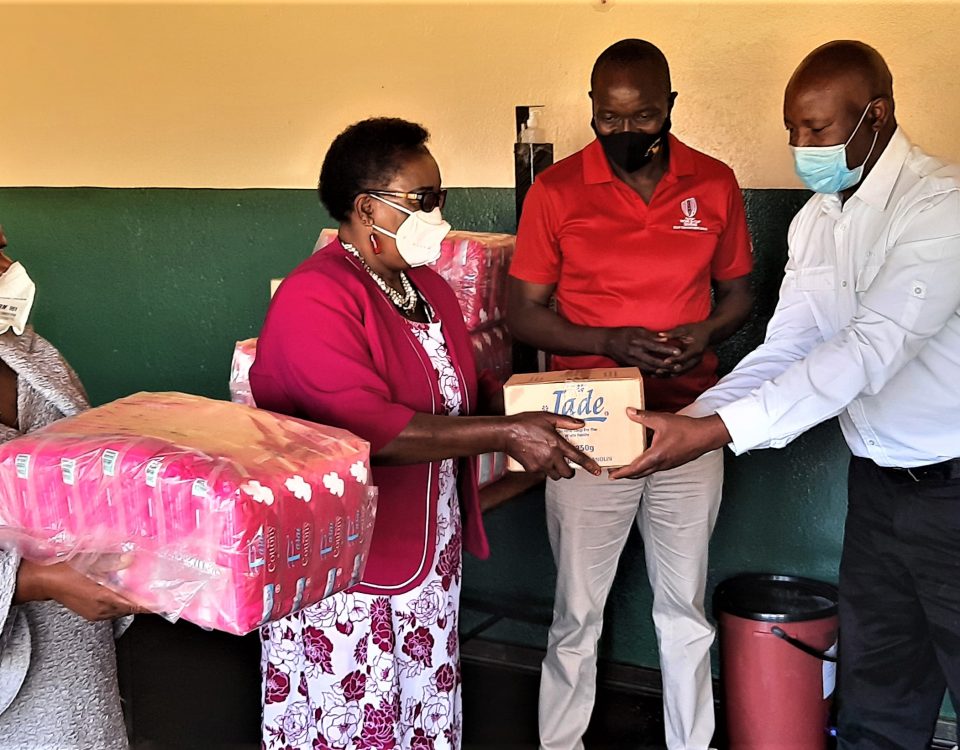 (L-R): Violet Chieza and her sister Grace Kwetemu handing over the donation on behalf of Caring For Girls Foundation to the Manicaland Rugby Board chairman Josiah Borerwe and ZRU president Aaron Jani (red) last week Tuesday at Mutare Sports Club.