This was said last week Wednesday during a side interview after he officially opened a strategic planning workshop for his Ministry that ran from Monday to Wednesday.

The all-inclusive strategic planning workshop was meant to draft the 2022 annual plan for the Transport Ministry that will be submitted to the Office of the President and Cabinet for execution. It comprised of members of the Parliamentary Portfolio Committee on Transport and Infrastructural Development, board members of parastatals and state enterprises in the Ministry, directors from the Ministry and heads of departments amongst other stakeholders from associations in the transport sector.

The Transport Minister, who now has almost eight months in Office since being appointed early this year by President Emmerson Mnangagwa, told the technocrats that he expects to see a 2022 strategic plan blueprint that will speak to the developmental needs of the people to complement the National Development Strategy (NDS1 2021-2025) .

“At the end of the day we might be gathered here and craft a very noble strategic plan but if it does not speak to the grassroots it will be useless, so whatever we craft should speak to the public. Let us move from the old trajectory of electioneering and becoming only visible towards elections, but actually do work for our people,” he said.

Quizzed on where Government stands on the implementation of long overdue key infrastructure projects such as the Feruka Bypass Road and Grand Reef Aerodrome rehabilitation projects in Manicaland, Minister Mhona said Government is seized with other national priority projects but is open to BOT or BOOT project financing arrangements.

“BOT will be the ideal situation for any infrastructure project, but we are also saying we are willing to partake a partner even the private sector, those that can do BOT or even BOOT, so that we then try and take the load from the fiscus,” said the Transport Minister.

Adding,”Remember we are actually dealing with one national purse. However, we are not only focusing on Mutare’s Grand Reef aerodrome but a number of aerodromes across the country that we are resuscitating as we speak. Some were under the purview of the military and some under the DDF (District Development Fund), but we are saying as a Ministry we are working closely to resuscitate such aerodromes to also enhance and promote tourism as what is being advocated by President Mnangagwa.”

Tourism operators in the Eastern Highlands have always bemoaned that their tourism bloc is world-class and unique, with the potential to take the lead in the country, but the biggest challenge has been direct air connectivity for easy access to international tourists.

The call for direct air connectivity to Mutare, the capital of Manicaland province, has been a loud call for many years, being defined as a key enabler, not only to boost tourism but business in general in the natural resource rich province.  Nevertheless, tourism operators in the region through the Eastern Highlands Experience, the Hospitality Association of Zimbabwe (HAZ) and Zimbabwe National Chamber of Commerce (ZNCC) remain adamant on the issue, continuing to lobby Government on the need for direct air connectivity. This has however remained a pipe-dream with unfulfilled promises and Government bureaucracy at play says real-estate businessman Joseph Sanhanga who has been very instrumental on getting the Grand Reef aerodrome rehabilitation project on track.

The then Minister of State for Manicaland Provincial Affairs and Devolution, the late, Dr Ellen Gwaradzimba (extreme right) emphasizing on the importance of the project to Joseph Sanhanga (with hat) and senior government officials in the province during a tour of Grand Reef aerodrome in January 2019.

Sanhanga was the last to make headway on the matter in 2019, after he received the green light for a public and private partnership (PPP) in the form of a, BOOT project financing arrangement for the refurbishment of the Grand Reef Aerodrome, which is  situated 20 kilometres west of Mutare.

Government, in 2018 through a decree by the then Minister of Transport, Dr Jorum Gumbo, after a plea from the then Manicaland resident Minister Senator Monica Mutsvangwa, authorized the rehabilitation and expansion of Grand Reef aerodrome to be used commercially. However, in January 2019, a U-turn on getting the project on track was made after Sanhanga was abruptly instructed to stop any works and reapply for the project by the then permanent secretary in the Ministry, Engineer Amos Marawa, who had just been appointed in September 2018. In the BOOT, the Civil Aviation Authority of Zimbabwe (CAAZ) was expected to partner a consortium of Manicaland businesspeople led by Sanhanga, to refurbish the aerodrome which has a runway of 1 234-metres, and considered to be the best option compared Mutare aerodrome (950- metres runway) near Mutare Teachers College on the periphery of Sakubva high density area.

Accordingly, following the decree, Grand Reef aerodrome, which is under the care of the Zimbabwe Defense Forces (ZDF) would be demilitarized and commercially utilised as a stop-gap measure, while Government worked on its future plans to build an airport for Manicaland on a piece of land already identified in Mutasa district, near Osborne Dam that belongs to the District Development Fund (DDF).

Sanhanga said he had started working on the project since 2017 doing back and forth engagements with CAAZ until the breakthrough in 2018, only to stopped again in 2019 due to what he called ‘unnecessary bureaucratic tendencies in government.’

“We had everyone including the Minister of Transport and the resident Minister of Manicaland onboard, appreciating the efforts we were making and even President Mnangagwa on his Mutare tour in 2018 applauded the move. But some people in government enjoy filing papers and sitting on them. Such bureaucracy impedes development. Some of us are now in our 70s and we just want to leave a legacy of developmental thinking for the young generation in Manicaland. It’s a shame that such a monumental developmental project is being backtracked,” said Sanhanga in an interview on Tuesday.

He however said the Covid-19 lockdown regulations impeded any efforts to advance the project after being stopped in 2019, but he has since started follow-up engagement efforts with the new Manicaland director in the Ministry of Transport and will soon approach the new permanent secretary and CAAZ to rectify wherever they had gone wrong on government procedures on PPP protocols. 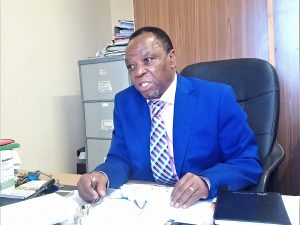 “As Ferro Consulting of Zimbabwe apart from the expression of interest to rehabilitate Grand Reef, we had also submitted an unsolicited bid for a BOOT for the Feruka Bypass Road. The Manicaland director acknowledged receipt of our proposal in 2018 but no response ever came through after our expression of interest was forwarded to the Head Office in Harare, up-to-date. So this is the bureaucracy that we hope the new Transport Minister and new permanent secretary will deal with,” said Sanhanga.

On the Feruka Bypass Road question, Minister Mhona said as a Ministry they are amenable to the issues of alternative routes to buttress and alleviate problems of traffic congestion and road carnage increasing along the Christmas Pass highway.

“What we also need, remember we also have stakeholders and we work in harmony with our stakeholders. These are some of the welcome developments that we would want (BOT arrangements), but we will also try and pursue the most pragmatic solutions to the problems being faced by heavy haulage trucks passing through Christmas Pass in Mutare,” said Minister Mhona.

Ironically, in Harare Government has already set aside funds to construct a modern, state of the art interchange flyover to replace the continuously congested Mbudzi roundabout, which is the exit and entrance route along the Harare-Beitbridge highway, with contractors reportedly now on site. Poignantly for the Mutare business community, the Feruka Bypass Road is equally important in terms of economies of scale and de-congesting the increasing flow of transit haulage trucks that use the Beira Corridor.

CFMT trustees during their launch last week Friday. One of the trustees is the former Mutare Mayor Brian James (extreme right)

“Our Council must be more proactive. Most people in central government do not live here, and it is evident that they are more concerned about where they live because they have stalled this project for too long. The local authority should flight an advert online and in newspapers for investors interested in the project, which will push the line Ministry (Transport and Infrastructural Development) and central government to prioritise the project (Feruka Bypass road), which has been shunned for many years, purportedly due to fiscal constraints,” said James in a side interview during the launch of CFMT in Mutare last Friday.

Transit haulage trucks continue to be on the increase in Mutare because of the Beira Corridor. This is mainly because, Forbes Border post in Mutare is the quickest gateway to the sea, given that the port of Beira in Mozambique is just 300km away from Mutare.

The Beira Corridor is one of Southern Africa’s main transport routes that links Zambia, Zimbabwe, Malawi, DRC and Mozambique to the port of Beira (Indian Ocean), linking both road and rail networks. Transit trucks have therefore been on the increase using the corridor, which has not only congested traffic along the Christmas Pass highway, but is also endangering lives as some haulage trucks carrying heavy loads struggle to drive on the steep slopes of Christmas Pass. Inner-city roads are also being destroyed by the heavy loads carried by the trucks, so the Feruka ByPass route which was earmarked and surveyed before independence in the he 1970s, is considered the best alternative.

The Feruka Bypass route goes round through the Dangamvura-Feruka Road (Old Dangamvura road) and passes through the Weirmouth farming plots and the National Oil Infrastructure Company (NOIC) Feruka depot. It then connects with the Arda Transau and Grand Reef main road that links with the Mutare-Harare highway, a few kilometres just after the Mutare tollgate. The Feruka Bypass road was surveyed to be navigable for haulage trucks compared to the Christmas Pass steep slopes. 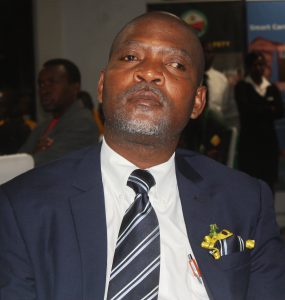 In June 2019 during a press conference, quizzed on progress regarding the Feruka Bypass Road, the then City of Mutare town clerk, the late Joshua Maligwa said they had found a potential financier, the Infrastructure Development Bank of Zimbabwe (IDBZ), which had placed the project under its 10 key projects. However, nothing has ever materialized on the ground since then. 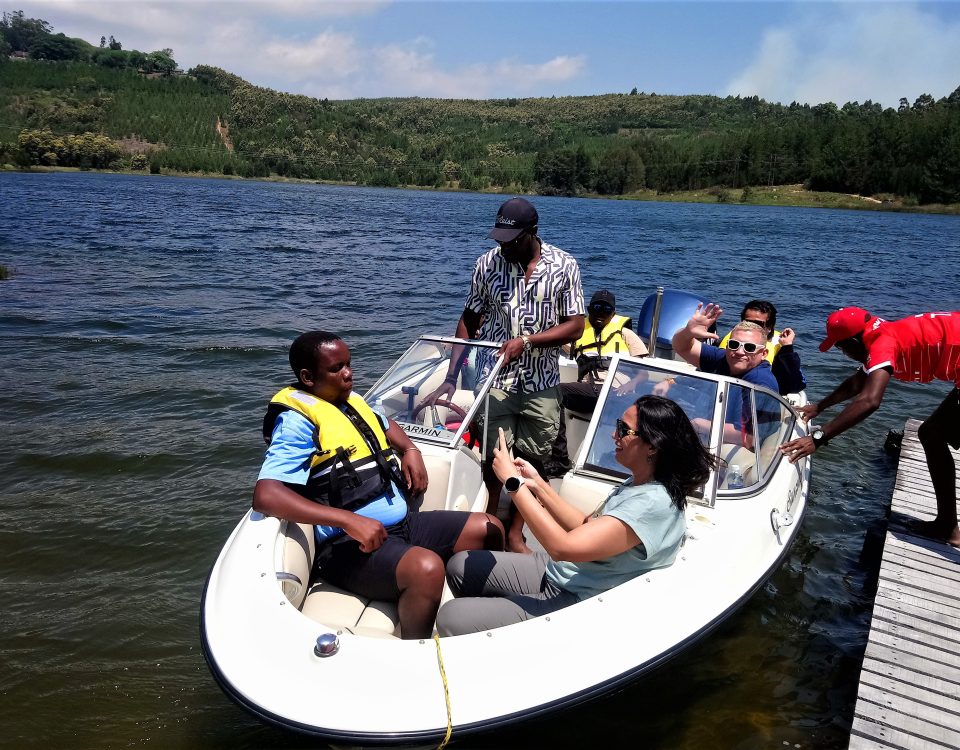 The international buyers getting ready to go on a speed boat ride at Small Bridge Dam in Mutasa district, a service being offered by Lake Alexander Country Resort, a new luxury resort expected to officially open soon before the end of the year.