Pellagia Mujaji and Nyasha Gwanzura with 29 and 23 runs respectively, both not out, finished the job for Mountaineers Women by scoring the last 49 runs in less than five overs today booking a place in the final for the eastern region cricket franchise . (PIC:Zimcricket)

MANICALAND’s cricket franchises Mountaineers Women and the Mountaineers (men’s team) today (Tuesday) booked their places in the 2021/22 Women’s and Men’s T20 Cup finals after thrashing Tuskers Women and Tuskers in their penultimate round-robin matches in Harare.

The Men’s and Women’s T20 Cup tournaments that kicked off last week Thursday in Harare are running concurrently. In the Women’s T20 there are four teams, Alliance Health Eagles Women, Mountaineers Women, Rhinos Women and Tuskers Women. whilst in the Men’s T20 there are five teams Mountaineers, Eagles, Tuskers, Southern Rocks and Rhinos. All the matches, including the third-place play offs and finals are being played across two grounds, Harare Sports Club and Old Hararians in Harare.

After the league stage, the top two teams on the points table will play the final while the bottom teams will face off against each other in the third-place play-off.

In the Women’s T20 today, Tuskers Women batted first on winning the toss, and did very well to reach a score of 129 for five wickets after the early loss of Sibonginkosi Ncube and Tasmeen Granger, both without scoring.

This was due to Loreen Tshuma’s fine batting as opener, as she began with a burst of quick runs and then consolidated to help her team after those early losses. She scored 38 off 34 balls before being run out with the score at a much more encouraging 70 for three wickets after only nine overs.

The middle order batted consistently without being able to maintain this good rate of scoring, with a good partnership between Nomvelo Sibanda (15) and Chiedza Dhururu (21), while Natasha Mthomba scored 19 not out at the death. Audrey Mazvishaya did the best among the bowlers, conceding only 14 runs off her four overs and taking the valuable wicket of Granger with a return catch.

Mountaineers Women had to bat well to haul down their target of 130. It was however a bad day in the office for Chipo Mugeri-Tiripano, who did not feature largely, being the first batter out for an aggressive 19 off 14 balls – and Tshuma was the bowler to take her vital wicket lbw at 36 in the fifth over.

Mountaineers Women’s Nyasha Gwanzura basks in glory with her player of the match accolade. (PIC: Zimcricket)

Mugeri-Tiripano’s team-mates nonetheless got them home with some fine batting. Just like her opening partner Loryn Phiri went on to score 36 off 52 balls to lay a firm foundation, while Pellagia Mujaji and Nyasha Gwanzura, with 29 and 23 runs, both not out, finished the job by scoring the last 49 runs in less than five overs.

Tshuma finished with the wicket of Mugeri-Tiripano for 23 runs in her four overs. The margin of Mountaineers Women’s victory was eight wickets, and they played very well for it, but Tuskers Women deserve some praise for their spirited fight.

Throughout the tournament, Mountaineers Women only conceded one defeat to Alliance Health Eagles on Sunday. The last round-robin matches scheduled for tomorrow (Wednesday) will decide who, between Alliance Health Eagles Women and Rhinos Women, will face Mountaineers Women in the Women’s T20 Cup final on Thursday at Harare Sports Club at 9:30am. The game between Rhinos Women and Tuskers Women on Sunday had to be abandoned because the Old Hararians ground was too wet for play after an early-morning downpour. The match will now be played tomorrow.

On the other hand, in the Men’s T20, a brilliant innings of 70 not out by Mountaineers Kevin Kasuza swept the Manicaland cricket franchise to a fine victory by eight wickets over Tuskers at Harare Sports Club today. Mountaineers have won all four of their round-robin matches in the T20 competition and will now meet Eagles in the final scheduled for Saturday.

Tuskers decided to bat first on winning the toss but their opening batsman Clive Madande was bowled by Tendai Chatara for six in the second over. Bright Phiri, the other opener, did his best for the team, hitting three fours as he scored 15 off 13 balls before being caught off Tinashe Muchawaya.

After that Milton Shumba was the only batter who shaped up well, as he ran to 35 off 29 balls, hitting a six and four fours. But he could not find a reliable partner, and the other middle-order batters were all soon dismissed for single-figure scores, although Luke Jongwe (9) might have made something of his innings had he not been run out.

Eight wickets were down for 88 before there came the highest partnership of the innings – but this was worth only 22 for the ninth wicket, as Thabo Mboyi made 17 off 15 balls, along with Sheu Musekwa, who was nine not out when the innings closed for a disappointing 116 for nine wickets.

Four Mountaineers bowlers shared the wickets, with John Masara coming off best with two for nine in his three overs, while Chatara and Shingi Masakadza also took two wickets each. 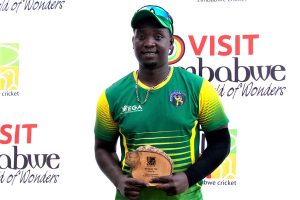 Mountaineers Kevin Kasuza was chosen as the man of the match. (PIC: Zimcricket)

The result was not long in any doubt, as Kasuza opened the Mountaineers innings with a blaze of strokes. His partner, PJ Moor, scored 14 off 16 balls and when he was caught off John Nyumbu, the score was 67 in the ninth over.

Spencer Magodo was out for seven, but by now the score was 88 for two in the 12th over. Tony Munyonga decided to give Kasuza some rivalry, and he hit out to such purpose that off 17 balls he hit 21 not out and blasted a six off Shumba to win the match in the 17th over. Kasuza finished unbeaten with 70, scored off only 54 balls, and it included a six and three fours.

Nyumbu was the only regular bowler to escape serious punishment, as his four overs cost 19 runs and he took the wicket of Moor.

The men’s third-place playoff match between Rhinos and Southern Rocks will be played Thursday afternoon at Harare Sports Club after the women’s final. The two finals as well as the men’s third-place playoff match will be live-streamed on Zimbabwe Cricket’s YouTube channel and website, while ball-by-ball coverage will also be available on the Zimbabwe Cricket mobile app. (Zimcricket)

A Mutare Sports Club (Msc) rugby player (blue) desperate for a try in the final minutes trying to shrug off tackles from the visiting opponents Northern Chiefs. Msc lost 15-12 to Northern Chiefs from Harare last Saturday in a friendly match played in Mutare.