Transport and Infrastructural Development Minister Felix Mhona (cap) being briefed about the background of Grand Reef by Airports Company of Zimbabwe (ACZ) chief executive officer Tawanda Gusha (left) and one of the soldiers guarding the military aerodrome. Looking on is Manicaland provincial road engineer in the Ministry of Transport and Infrastructural Development Kudzai Maganga (extreme left) at Grand Reef Aerodrome last week Friday.

TRANSPORT and Infrastructural Development Minister Felix Mhona has revealed that plans are now at an advanced stage to look into the refurbishment of Grand Reef Aerodrome and construction of the Feruka bypass road to decongest haulage trucks using the Christmas Pass highway in and out of Mutare.

This was said last week Friday during a familairisation tour of Grand Reef Aerodrome which is 37 kilometres west of Mutare. The Transport Minister was accompanied by the Manicaland provincial road engineer in the Ministry of Transport and Infrastructural Development Kudzai Maganga and Airports Company of Zimbabwe (ACZ) chief executive officer Tawanda Gusha. ACZ, is the new state entity established in 2020 after the disbanding of the Civil Aviation Authority of Zimbabwe (CAAZ), with its main responsibility being to manage the country’s airports and aviation infrastructure.

Grand Reef is currently a militarized aerodrome under the Zimbabwe National Army (ZNA). It has a runway of 1250m x 30m and is considered better strategically positioned than Mutare Aerodrome in Sakubva which has a runway of 950m. Minister Mhona however said under the Second Republic Government, President Emmerson Mnangagwa wants to see transformation for the country, which will entail building enabling road and aviation networks to improve accessibility and ease of doing business locally and with the international community.

“We are saying Zimbabwe is open for business, so we need to move with speed on refurbishing key enabling infrastructure. That is why we are also looking at the Feruka Bypass route to effectively connect Mutare and decongest the Christmas Pass highway…Scopes of works will be done after this visit and clearance of the Grand Reef runway, so we are not just talking about something that we are planning but what we intend to do,” said Minister Mhona.

He added that they want to resuscitate and open up for public use all aerodromes countrywide connecting major cities and resort areas which are under the purview of the District Development Fund (DDF) and the military, in the case of Grand Reef. “This will synchronize the aspect of tourism especially for the Eastern Highlands in terms of direct connectivity. The idea is to go in tandem with vision 2030 and come up with a holistic product that will benefit the economy and appeal to the international community in terms of modernity and infrastructure development,” he said.

The turn off to Grand Reef Aerodrome along the Mutare-Harare highway just after the Mutare tollgate.

Minister Mhona said this year the target will be to rehabilitate Grand Reef Aerodrome then next year start working on the green field identified to build a commercial airport for Mutare. He said in solidarity with the mantra by President Mnangagwa that ‘Nyika inovakwa nevene vayo (a country can only be developed by its citizens)’ there is no better time for Zimbabweans in the diaspora to invest home as well as those home to take up venture business opportunities in the wake of devolution and through the one-stop-shop, Zimbabwe Investment and Development Agency (ZIDA). ZIDA is an investment agency responsible for promoting and facilitation of both local and foreign investment in the country. It came up as an integration of three investment authorities, which were previously housed in different Government Ministries and Departments, in a bid to cut bureaucracy in joint ventures and business investments.

“Our President is a listening President. Wherever he goes out of the country, he is always encouraging Zimbabwean’s in the diaspora to feel free to invest back home. The door is open for private sector to come and partner government and work together. It’s a thing of the past bureaucracy. In the Second Republic we do not waste time and we are not operating from the offices, which is why we are here. The one stop shop through ZIDA cuts bureaucracy. Even the investors that want to see the President that used to be blocked, it’s now a thing of the past,” said the Transport Minister.

Minister Mhona however admitted that a lot of work still needs to be done in infrastructure development due to legacy issues and years of neglect of some key projects, so Governments focus is to finish key pending infrastructure projects such as the Grand Reef Aerodrome for Mutare, before embarking on new aviation projects.

The Grand Reef Aerodrome runway that needs to be spruced up.

Gusha said the preliminary budget for new infrastructure upgrade at Grand Reef was US$40 million.

“We need to extend the runway to land bigger aircraft and enable reliable air access to Mutare. At the existing aerodrome we do not have passenger facilities, and by this I mean a terminal building and an air traffic control tower to expeditiously control air traffic as it lands and takes off. Those are the works that we intend to do. We have done initial assessments and we are now mobilising the resources so that we can upgrade this aerodrome,” said Gusha who was appointed as the first Ceo of ACZ last year in July.

He added that the identified land for a commercial airport for Manicaland was an old DDF runway at Five Streams farming area in Mutasa district near Osborne Dam. “At the moment we are still at feasibility study stage to find out the size of the airport that we intend to build, that is the size of the runway, airport buildings and handling capacity. But then, it will also have cargo facilities to take advantage of the cargo potential in the Eastern Highlands and also the tourism potential in the region.”

Adding, “In all our airport infrastructure development programmes, we are on a drive to develop our airport infrastructure so that we modernize to meet international standards.  So we completed works in Chiredzi at Buffalo Range runway with the assistance of our partners, DDF. We are also moving in to work on Charles Prince Airport in Mt Hampden, then Kariba airport before moving to Hwange National Park airport and Masvingo airport. This is our plan for smaller airports not leaving the works already underway at our Robert Mugabe International Airport expected to be complete by end of the year.”

Gusha added that in terms of developing modern airstrips and small airports there is potential to have partnerships with private stakeholders as an international best practice model. “When it comes to the actual running of the airport, it is something that we should consider to say how do we then attract private partnership? This is also a drive that we are following in line with the public and private partnerships model that Government is embarking on,” said Gusha. 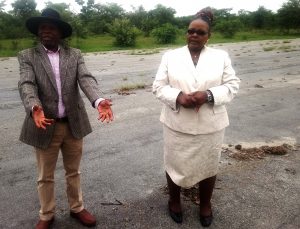 (L-R): Real estate businessman Joseph Sanhanga explaining to the late Minister of State for Manicaland Affairs and Devolution Dr Ellen Gwaradzimba, how his consultancy intends to make direct air connectivity a reality for Mutare at Grand Reef back in 2019.

The pipe-dream for direct air connectivity to Mutare has been a topical issue for the past 10 years, especially from tourism operators and business lobby groups that are losing out from competitors in other regions with direct air connectivity. It was only in January 2019 that meaningful progress was really seen after Mutare based real-estate businessman Joseph Sanhanga was given the green light to pursue inquests on the matter to develop Grand Reef Aerodrome as a stop-gap measure by the then Transport Minister Joram Gumbo. The unforeseen global covid-19 pandemic that started in 2020 however stalled all projects up-to-date, as all priority shifted to combating the pandemic.

It is only this year that Government has started revisiting some of the envisioned key projects like the Grand Reef Aerodrome that had been shelved, as the covid-19 pandemic is now containable through vaccine drives. On the other hand, Fly City Air last year on October 31 became the first commercial passenger chatter flight between Harare and Mutare landing at Mutare Aerodrome. Using Cessna model 12-seater planes operated by Falcon Air, the chatter flight is 30 minutes. However, the 950m runway at Mutare Aerodrome is not easily navigable for planes bigger than that, unlike at Grand Reef Aerodrome, which is why Grand Reef was always considered the best option.

A loaded 30-tonne truck going up the steep slopes of the Christmas Pass route from Harare.

Regarding the Feruka bypass road, the Christmas Pass steep slopes are increasingly becoming a deathtrap for haulage trucks, especially the 30-tonne trucks that will be carrying heavy loads. For many years now, on a number of instances, haulage trucks have been involved in road accidents, mostly due to brake failure when they descended the steep slopes of the meandering Christmas Pass road. Year in-Year out almost every month there is a haulage truck accident on Christmas Pass, be it casual or fatal, the trend is now worrisome.

Transit haulage trucks will continue to be on the increase in Mutare because of the Beira Corridor. This is mainly because, Forbes Border post in Mutare is the quickest gateway to the sea, given that the port of Beira in Mozambique is just 300km away from the eastern border city. The Beira Corridor is one of Southern Africa’s main transport routes that links Zambia, Zimbabwe, Malawi, DRC and Mozambique to the port of Beira on the Indian Ocean, linking both road and rail networks. Transit trucks have therefore been on the increase using the corridor, which has not only congested traffic on the Christmas Pass highway route, but is also endangering lives as some haulage trucks carrying heavy loads struggle to drive on the steep slopes of Christmas Pass.

However, the Feruka Bypass road was surveyed long ago before independence in 1980 as an alternative to decongest traffic that uses the Christmas Pass highway, with haulage trucks mostly in mind as the route is on a flat road. The route goes round through the Dangamvura-Feruka Road which passes through the farming plots of Weirmouth and the National Oil Infrastructure Company Feruka (NOIC) depot, then connects with the ARDA Transau and Grand Reef main road that links with the Mutare-Harare highway a few kilometres just after the Mutare tollgate.