Honorable Noveti Muponora (with cap) who was the acting chairperson of the Portfolio Committee on Transport and Infrastructure Development touring infrastructure projects in Chimanimani recently.

GOVERNMENT is going to terminate all contracts of road construction contractors that are doing substandard work and excessively inflating tenders, before suing, Easterntimeszim has learnt.

This comes in the wake of several complaints countrywide by the public on poor workmanship being undertaken in the ongoing Emergency Road Rehabilitation Programme (ERRP) initiated by President Emmerson Mnangagwa. Last year in February, President Mnangagwa declared the country’s road networks a state of national disaster and launched the ERRP to restore them.

Whilst the ERRP came as a commendable initiative given the long overdue neglect to invest in rehabilitation of road networks by the Government of his late predecessor Robert Mugabe, the programme may not achieve the intended results due to corruption and substandard work by some contractors, Easterntimeszim has learnt.

“We are following up on contractors that are excessively inflating tenders and doing substandard work or not even doing the work at all. We are going to cancel their contracts and take legal action,” said the Transport Minister.

Minister Mhona however implored the Zimbabwean populace to bear with Government as it has a mammoth task under the Second Republic to address legacy issues and age-old contentious projects that had been abandoned but were of great significance.

“The problem is that our roads had for a long time not been rehabilitated. However in the Second Republic we are now resurfacing the roads. In the next coming weeks you will see that we are re-surfacing roads, including those in urban areas that were under the purview of local authorities. But this is not the time for political blame games. We need progressive action to fix our run-down road infrastructure, including those areas that were not done well by local authorities,” said the Transport Minister.

The country’s highways and inner-city roads are now pothole infested, whilst some are now more like gravel roads as the tar is now run-down.

In a sideline interview with Easterntimeszim after the tour, Honorable Noveti Muponora who was the acting chairperson of the Portfolio Committee on Transport and Infrastructure Development, which had been split into separate teams, said the committee was exercising its oversight role as parliamentarians, tracking infrastructure development projects, particularly those embarked on in remote areas.

The committee was escorted and shown around by provincial roads engineers and District Development Fund (DDF) representatives in the regions they visited, in order to get detailed reports on projects and any challenges which were being encountered.

The Mt Darwin North legislator said whilst some roads are being done on time and professionally, sadly there were several road construction projects tendered to private contractors which were questionable and left a lot to be desired.

“Before coming to Mutare, we first went to see the Marongora road about 40km from Chirundu, which used to have a very badly potholed section stretching about 13km. There was a grant from the Chinese government and from the availed funds of US$21 million, a stretch of 6.5 km was rehabilitated. However, as a committee doing our oversight role on the works done, we had some questions. Normally a standard road costs US$1 million per kilometre to do tarring using bitumen. However on that stretch $21 million was used for 6.5km, so questions have to be raised for the provincial roads engineer to furnish us with the contract and a report and to see who the contractor was,” said Hon Muponora.

Hon Muponora added that there were areas like Mukumbura in Mashonaland Central where there is Tsenga bridge and Nyautande bridge damaged more than 20 years ago by cyclone Eline, but no clear explanation was given by the provincial roads engineer on why it took so long to do works there when funds were disbursed from Treasury.

“In Mashonaland Central in Shamva, we saw Kaziro road about 16km. It was a single standard gravel road done by DDF and we were satisfied even by the cost and standards. Which made us come to the conclusion that we will recommend to Government to capacitate DDF for perfect work and fair costing unlike the inflated rates being charged by some private contractors,” he said.

Hon Muponora said the worst case of intolerable defiance by private contractors was in Mashonaland East on Nyamadecha road, which was initially first undertaken under the Transitional Stabilisation Programme (TSP). “It was allocated money for about 10km under TSP and nothing was done. We were told that even the leadership in the Ministry (Transport) advised that the road was completed, but nothing was done. Under ERRP I it was allocated money again, but nothing was done and even under ERRP II, there is no work taking place,” he said.

Adding,” When we got there we saw the contractor coming in, but when we left he was no longer there. So we have requested for a full report about this project. The first contractor under TSP, we will get the name, but under the ERRP it’s now a new contractor, Fossil.”

In Manicaland the committee toured roads and bridges damaged by cyclone Idai. On the bridges Hon Muponora said they visited three bridges along the Chimanimani road and the work itself was satisfactory. However, on the roads there was one road done by DDF which he said was overpriced.

“The road was already there, it was only being upgraded to a gravel road, but the cost itself leaves a lot to be desired. A stretch of 16km costing more than $600 000 for a gravel road is too much. There was also another gravel road redone on a stretch of 20km costing around $300 000. Their explanation was that they hired equipment. But the explanation is ambiguous and we requested a report for those roads. “

Hon Muponora said after the countrywide field visits, the committee will submit its recommendations to the Executive to act on what it would have seen on the ground. “On a way forward, we have government departments like DDF and CMED (Central Mechanical Equipment Department) also now doing construction works, as well as the Department of Roads. Those departments if equipped can do exceptional work unlike what private contractors are doing,” he said.

The Mt Darwin North legislator also questioned why the Ministry of Transport waits for private contractors to finish road projects regardless of poor workmanship instead of inspecting each stage they do. “I am not sure if its lack of technical capacity, but there is need for more to be done on its supervisory role. Why they leave the whole process of poor workmanship going on until the end of the project is wrong. There should be more diligence on the awarding of contracts and follow up till the end through regular inspections,” said Hon Muponora.

Early this year in January, Minister Mhona called on the newly appointed Zimbabwe National Road Administration (Zinara) board members to clean up graft in the parastatal to ensure the success of the ERRP.

Corruption remains divisive in Zimbabwe as several creditable blueprints continue to fail due to non-implementation of programmes. Despite having created the Zimbabwe Anti-Corruption Commission (ZACC), it is still to prove its role in terms of arresting bigwigs involved in multi-million corrupt tenderprenuership deals. ZACC has become more infamous for what has become known as the ‘catch and release’ syndrome when it comes to cases of high profile businesspeople and politicians involved in corruption allegation scandals. 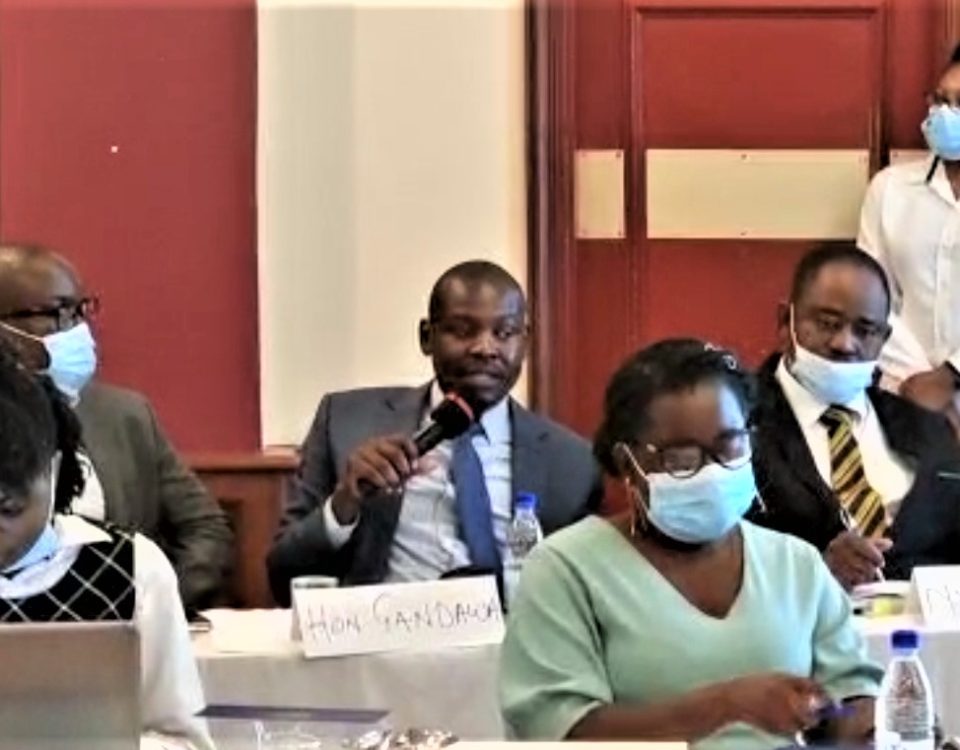 The deputy chairperson of the ICT Parliamentary Portfolio Committee Honourable Ability Gandawa (with microphone) speaks out candidly during the two-days stakeholders engagement workshop organised by POTRAZ in Vumba that ended yesterday (Tuesday).