Ignorance towards COVID-19 by Mutare residents in pictures

Empty stalls at Miekles Park Flea after the operation to ban all flea markets by Mutare City Council Saturday morning.

MUTARE City Council yesterday (Friday) started its blitz on illegal vending and decongestion of market places as part of efforts to minimize human contact in the fight against the coronavirus.

In a press statement read by Mutare Mayor Blessing Tandi the local authority said it was given the authority to enforce activities together with other security services through the recently promulgated Statutory Instrument 77 of 2020, and urged citizens to be compliant. Mayor Tandi told vendors trading at undesignated sites to immediately vacate as part of their efforts to curb the epidemic by decongesting market places and social distancing people.

“As a City we are a lower arm of government and we have already started implementing the Presidential decree… We appeal to those who may want to gather that they should confine to the stipulated numbers to avoid brushing aside with the law. This is a difficult moment for us a City and as a nation, but we should take such drastic measures to ensure the safety of our people. It is my hope and belief that none in this City and Province at large will succumb to the COVID- 19 virus,” said the Mayor. 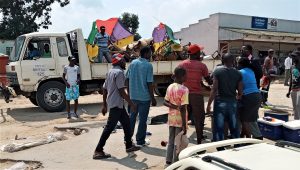 Some vendors trying to negotiate with one of the Mutare City Council officers (extreme right in black jacket), but he did not tolerate anyone.

After recording its first COVID-19 death case on Monday, Government enacted Statutory Instrument (SI) 77 of 2020 which provides that individuals who violate a raft of measures put in place to combat the coronavirus face up to 12-months imprisonment. The SI reads:

The first blitz to decongest market places started at the Sakubva bus terminus yesterday where undesignated vending stalls were confiscated. The blitz to close down all flea markets followed this morning (Saturday) which saw flea markets at Motto-Motto, Chidzero, New Bar, Sakubva Flea Market and Meikles Park being closed down. 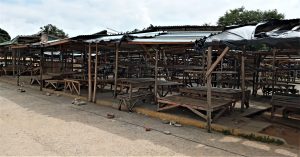 The aftermath of the ban on all flea markets which was effected today (Saturday) countrywide.

Subsequent to the Mutare City Council press statement, President Emmerson Mnangagwa addressed the nation yesterday evening and officially declared a total shutdown where all citizens are to stay indoors in light of the spreading coronavirus pandemic. The shutdown is with effect from Monday, 30th March 2020 and will run for an initial period of 21 days, subject to review.

The President said food markets will remain open and movement will only be allowed with respect to the procurement of food, medicines or other necessities, but all non-essential services will be expected to completely cease operations.

In addition to food markets, industries producing food, water and sanitary products would also be permitted to remain open.

“In light of shutdowns around the world, government will galvanise local industry and colleges to produce what we can locally; this includes the manufacture of sanitisers, personal protective equipment and medicines,” said the President.

He said security forces would be deployed where there is non-compliance and as part of the restrictive measures, all public transport will be grounded. Only the state-owned Zimbabwe United Passenger Company (ZUPCO) and government workers’ buses, will remain operational but are expected to observe social distancing and sanitation practices.

President Mnangagwa said as of yesterday, Zimbabwe had only 5 cases confirmed positive for coronavirus and one death recorded on Monday. One case emanated in Victoria Falls and the rest in Harare. Mutare City Council also cleared the air on speculations that had circulated on Thursday on a coronovirus case being confirmed positive in Mutare.

“As of the 27th of March 2020 City of Mutare and Manicaland at large has not yet recorded any confirmed COVID-19 case…This week we had four suspected cases and two of them visited the Mutare City General Hospital after developing COVID-19 related symptoms. After further observations and interrogations, City Heath noted the suspects did not meet the criteria for coronavirus symptoms. Only one suspected COVID-19 case met the definition criteria for testing and samples have been sent to Harare but results are not yet out,” read the press statement.

According to a 2018 report by the International Monetary Fund (IMF) Zimbabwe has the second largest informal economy as a percentage of its total economy in the world, after Bolivia, The bulk of Zimbabwe’s populace survives on trading in the informal sector of which according to the Labour and Economic Development Research Institute (LEDRIZ) most people in the sector work in ‘survivalist mode’.  This explains why President Mnangagwa has been in a dilemma to completely shutdown the informal sector from the onset when the first case of COVID-19 was confirmed in the country. He has preferred to instill controls rather than outright bans in this sector. 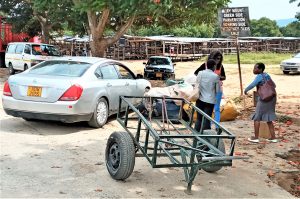 Some of the Meikles Park flea market vendors plotting what to do next after being forced to pack up their goods and leave their stalls.

However, LEDRIZ economist Dr Prosper Chitambara foresees another tragedy from the shutdown of the informal sector.

“The informal sector is characterized by serious decent work deficits. Decent work is productive work where the workers’ rights are protected, their jobs and their incomes are protected and their social standards maintained, but these do not apply in the informal sector. People will therefore starve if they go for 21 days without work as they rely on generating daily income for survival,” said Dr Chitambara.

On the otherhand, on Friday, Italy reported 919 new deaths from coronavirus, the highest number of fatalities any country has reported in the space of 24 hours since the outbreak began late last year. The total number of people who have died as a result of COVID-19 in Italy now stands at 9134.

By yesterday (Friday) the number of people infected rose to 86,498, meaning Italy has now become the second country after the United States to overtake China in terms of cases. In just over two months since the first case of coronavirus was reported in the US, it has become the epicenter of the global pandemic, overtaking China and Italy. The number of confirmed coronavirus cases in the United States topped 101,000 on Friday.

Worldwide, more than 25 000 people have died from coronavirus, an infection which has affected more than half a million people now, according to the World Health Organisation (WHO). However, WHO also says more than 127 000 people worldwide have recovered from COVID-19.

Although shutdown is being accepted as a necessary measure, a lot of people on social media castigated President Mnangagwa for failing to mention anything on effecting a public health plan or food handout programme for the destitute and homeless during the period, especially in the urban centres.